Why I learnt Angularjs?

by Veerappan Vairavan
in AngularJS Tutorials

I started my career by developing Rich Internet Applications using Adobe Flex. Flex is an extremely amazing language in terms of bringing modularity to the code extending the object-oriented concepts but unfortunately, the popularity of flex got reduced due to a lot of reasons which I don’t want to talk about in this blog. So being a UI developer my next best thing was to learn HTML5, CSS, and JS which sounded really confusing to me as there was no defined approach for writing js variables, methods, accessing and manipulating DOM whenever and wherever sounded little too much for my background but somehow I mastered the HTML, CSS, and JS as those were the fundamentals of any JS Frameworks. When I heard about Angular, I was really happy that it brings a lot of features, which sounded like a more refined way of developing UI applications.

I deep-dived into Angular and realized that this framework is most suited for people who spent most of their programming live in languages like JAVA, .net, C++, AS3, etc., and who would like to develop more reusable components in a more modular way rather than writing continuous scripts and manipulating DOM. So in this series of tutorials, I am going to try my level best to explain what I have understood over a period of time in a simpler way.

To begin with, let’s start creating a project in a structure, which will help developers to isolate the code in different boxes. I generally use Brackets as my IDE and please feel free to use any IDE of your choice. 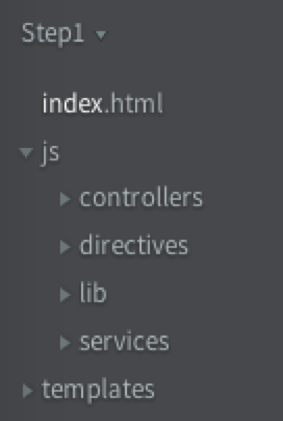 Keeping aside these directives, there are some basic concepts, which need to be understood before getting into code level. Here I am going to talk about some basics, which I think are required even to start a basic coding in angular. If you are familiar with the below concepts please feel free to skip this part and move on to bootstrapping angular.

$scope: In the whole series you keep seeing this $scope, so what is this $ first of all? Well, $ in angular denotes an inbuilt service, this $ is used in angular primarily to identify the objects which need to be dependency injected automatically when the angular compiler sees anything with prefix $. Here $scope acts as a model that will get bind to the HTML view. Both view and controller share this scope. Assume $scope as an object with prototypical inheritance just like any JavaScript object.

Controllers: These were attached to DOM elements using an inbuilt directive called “ng-controller”. Controllers will have access to $scope is injected in the controller. Technically Controllers were used to changing the data in the $scope bounded to that controller which in turn affects the view (HTML) automatically. Each controller will be defined with a name and attached to the HTML element in the DOM. We will see about controllers in a more detailed way in later chapters.

Templates: Angular gives a clear separation of concerns by providing a way to have individual HTML templates. These HTML templates do not need to be a full HTML file with HTML, body tags because these are the partial templates that will be included in the main HTML file by angular js.

Now we have successfully bootstrapped Angular in our application.

You will still see the blank page when you run index.html but this time no error in console because we have created an angular module and provided the name “appViewer” and the same is linked to ng-app.

When the DOM gets loaded angular will look for ngApp directive in the html tags and the moment it finds the ngApp it will load its associated module in our case it loads “appViewer” module.

In the last tutorial we have seen a new State but it just navigated us to a new Page with...

After all the work done in the last two tutorials we are about to do the real stuff which we...

In the last tutorial we have seen there happened to be a change in the url. The url changed from...

Angular is mostly used for SPA (Single Page Application) but still every app requires some kind of navigation from one...